Riding on the Verde Canyon Railroad 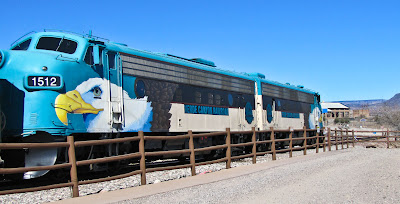 That first step onto a train is a step toward adventure, and who doesn’t love an adventure? The destination may be fixed, but adventure is all about anticipation, the thrill of what happens next?

As a Portland, Oregon teenager, RL had a memorable train trip along the Columbia River. Enroute to Pendleton the fast moving train stopped abruptly, a violent braking, unscheduled kind of stop and definitely not at a station. Curious about the cause, RL and a few companions leapt off and walked forward to discover one engine in the river and a second engine about to tumble in. A landslide had swept the rail bed into the water. That was quite an unexpected adventure on a very short trip!

On my first solo train trip I traveled from home in Chicago to visit my grandparents in Portage, Wisconsin. Entrusted to the care of a watchful conductor (or porter perhaps), I stored a few, brief memories. I can recall the nervous excitement of traveling alone, carrying a cardboard shoebox tied with string and filled with sandwiches wrapped in waxed paper and a few brownies to snack on. I think I passed the time reading and rereading some comic books and creating fanciful dialogues with my favorite paper dolls.


On another solo trip I traveled to Girl Scout camp near Iron Mountain, Michigan. With few camp memories to recall, and zero memories of the train ride itself, I wonder if there was any adventure involved.

Fast forward many decades. During a trip from Munich, Germany to Salzburg, Austria I stayed tethered to my window, captivated by the scenery rushing by. Small village appeared, one after the other, their church steeples poking skyward through the trees, each steeple a different design. It was restful, bucolic scenery. But my first step off that train, into a flurry of swirling snow, announced that the train ride had ended but the adventure was just beginning. Today, closing my eyes, I can relive the sights and scents of Christmas Markets, my first-time-ever view of the Alps, a heavenly evening of Mozart, my first funicular ascent... All that and more, plus the continuing anticipation of "What next?"

But that's all history. For the 2011 Verde Canyon Railroad trip we looked forward to a pleasant ride through interesting scenery. It turned out to be much more than we expected! The refurbished first-class seating and large windows of our vintage train car were largely ignored. Once the train began moving we spent most of the time standing in an open-air observation car. Intriguing 360 degree views and the naturalist's on-going narration about Verde Valley geology/biology kept us outside with our cameras. We did retreat inside briefly to nibble on some appetizers and an ice cream bar to keep up our strength. Then back to the observation car for more photos and information.

Built around 1911 to connect the copper mines at Jerome with a smelter at Clarkdale, this shortline still hauls some freight and connects Clarkdale with the larger Burlington Northern/Santa Fe line at Drake. We only traveled a portion of its length on this four-hour trip. 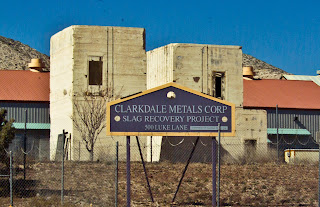 The slag heap still looms large as a Clarkdale landmark, a reminder of an active mining era. 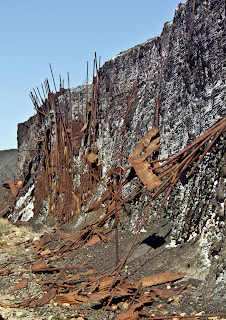 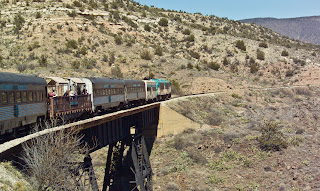 The rail bed follows the slow-flowing Verde River for much of the trip. 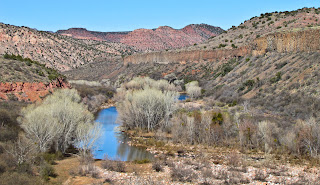 There are few ranches or residences along the route, and much of the land has been declared a wilderness area. 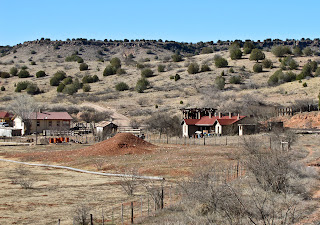 Towering red-rock formations line the deep canyon. A 680-foot curving tunnel made for a long moments of total darkness! I was too much "in the moment" to capture it on camera. 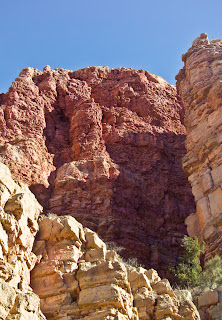 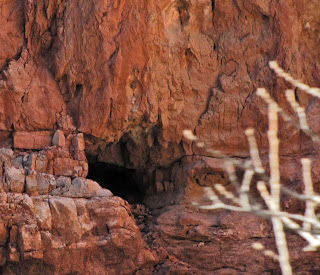 The train station at the Perkinsville ghost ranch was abandoned long ago, but the ranch still operates. 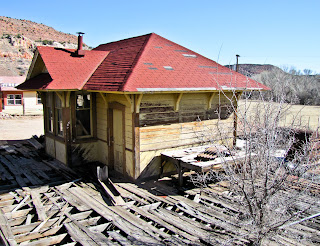 The posh interior of our train's caboose hints at the sumptuous comfort of long-ago travel in private cars. 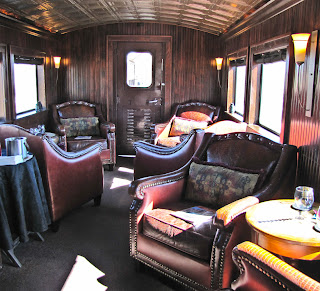 Every train story must end with the caboose, right? The End. 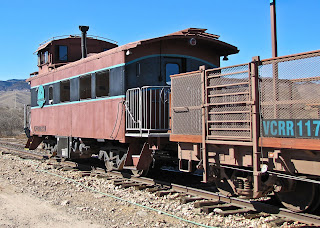 More adventure came the next day when explored a few miles along the far side of the river.