The mile-high city of Prescott, Arizona ranks high on my list of road trip destinations. The winter sunshine and clear blue sky helped to feature the city and the scenery at their best. The high desert, towering pine trees, fresh mountain air and scattering of snow on the ground were a welcome contrast to the valley's desert dust - not that we don't love the lower desert too!


We based at a B&B, the Prescott Pines Inn, and enjoyed its hospitality and comfortable accommodations. It was a welcome treat to curl up under a thick comforter, grab a book and read in bed with a view of the fireplace. We lingered over the multi-course breakfasts, visiting with other guests and planning our day.   We decided to focus on the countryside, since we had already explored the city on a previous trip. One quick walk around Courthouse Square, a warming Irish coffee at the Palace Saloon, and off we went.


The swinging door entrance to the Palace Saloon on Prescott's Whiskey Row. Opened in 1877, the Palace claims to be the oldest frontier bar operating in Arizona. 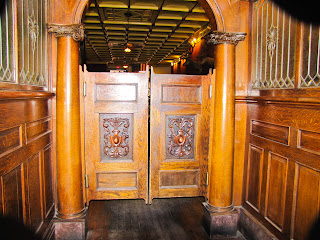 The Palace burned down during the 1900 Whiskey Row fire, but the Brunswick Bar was saved. This beautiful bar, carved in the 1880's, was carried out by customers and hauled across the street to the courthouse lawn. By 1901 the Palace was back in business and the bar was back in place. 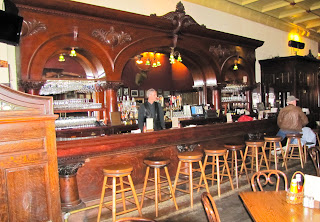 Granite Lake, Granite Dells, granite rocks - we toured and hiked and took tons of photos.  I could spend weeks in the area, exploring and marveling at the scenery. 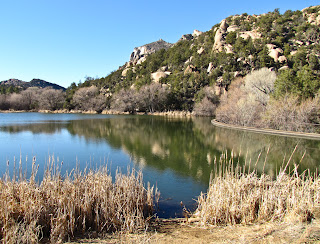 I wonder how long that huge boulder, larger than an RV, has been defying gravity? 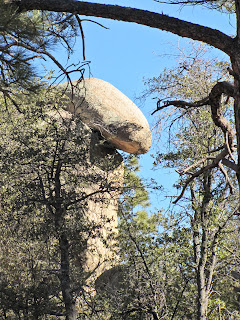 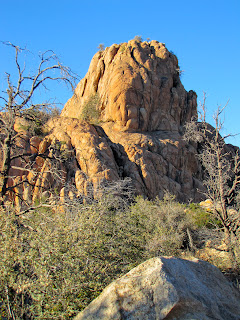 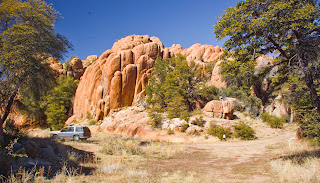 This was it, the lot I wanted to purchase for a new home. You think I'm kidding? Just check out the real estate website for The Canyons at Granite Park and you might be tempted too. At least for a moment or two. Think Sedona landscape without the crowds. But I was too late, this lot was no longer available.
Posted by SeattleDee at 7:22 PM 1 comment:

The Road to Stanton, Arizona 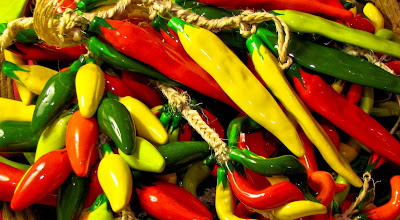 Close your eyes and picture "Arizona". Does that flash a slide show of brightly colored images? Visions of spicy SouthWest food platters, or the intense colors of flowering cactus, perhaps the primary hues of chile ristras hanging in an open-air market, and even some colorful people. Arizona colors are bold, except when they're dusty, or old or sun-bleached. I love it all. Well, not so much the old, dusty, rutted dirt roads. Those I will take in very small doses.


Along the 60-mile drive from Wickenburg to Prescott (historic US Route 89) the map showed County Road 109, a side road leading to the ghost town of Stanton. That sounded interesting so we set off to explore. Oh my, what a long, lumpy bumpy detour those few miles turned out to be. We traveled very slowly, 15 to 20 miles per hour, to avoid being bounced off the Explorer's headliner. Each mile of scenery looked the same as every other mile. I called "Stop!" for a picture of any interesting sight, just to get out of the car and walk around.


Interesting sight 1: a bullet-riddled sign for a dairy farm not far from the city. There was no green pasture here - do you suppose the cows care? 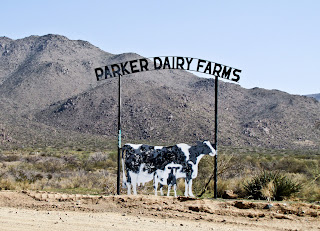 Interesting sight 2: a handful of range horses, curious to see if we had any treats I suppose. What do they graze on, in the midst of acres and acres of dry ground and cactus? 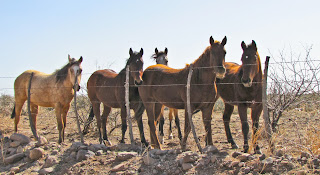 Interesting sight 3: some pieces of mining equipment scattered around the hills,  but not a person in sight (not aboveground anyway). 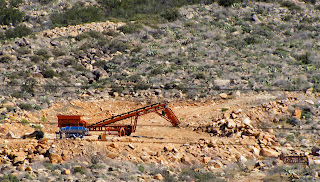 I had expected Stanton to be a quiet, deserted site with a few old buildings. So why was there so much traffic kicking up dust on this stretch of gravel road? Weeks later I googled Stanton and discovered the old ghost town is now owned by the Lost Dutchman’s Mining Association and has been transformed into an RV campground. That explained the traffic, but not why RVers would find this location so attractive. These must be serious hobbyists who come to prospect for gold in the Rich Hill area. There were scores of white sticks in the ground everywhere that could have been claim stakes. LDMA owns 125 acres; ample room for a lot of prospecting. 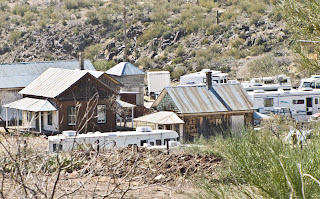 Stanton appears much tamer now than it was during its Gold Rush past. (click here for a summary) Following an 1863 gold discovery at nearby Rich Hill, the stage stop called Antelope Junction grew rapidly into a boom town.  Charles P. Stanton (a colorful, perhaps unsavory character) renamed the town after himself in 1871. Stanton was shot and killed in his store in 1886, but the town continued to prosper until gold mining ended and it finally became a ghost town.


The Saturday Evening Post, which bought the town in the late 1950s, gave the 10-acre site away in a jingle contest. The New York winner of the contest had no idea what to do with a beat-up ghost town and sold it.

Notice the dusty, curving gravel road heading up the the hill in the photo below. County Road 109 remained as bumpy as ever on drive out of Stanton. However the scenery became greener as we wandered up and over one hill, down and around another hill, and up another hill... Finally we reconnected with Hwy 89 at Yarnell and continued on the way to Prescott. 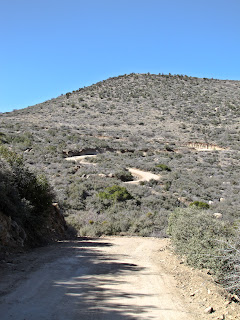 We departed Wickenburg, elevation 2056 feet, in the warm morning sunshine. By late afternoon the pine tree city of Prescott, elevation 5400 feet, offered cooler sunshine. Cool? oh yes, there was snow on the ground along the shady side of the road. It felt like we had toured two different Arizonas in one day.
Posted by SeattleDee at 4:43 PM No comments:

I-5 in Northern California

We love the winding drive along the coast, Hwy 101 and Hwy 1, but we had a schedule to meet - a special birthday party in the Los Angeles area. So we left the Pacific at Reedsport, turned inland toward Roseburg, and drove through Northern California along I-5. Wow! Mt. Shasta looked as impressive as always, though the snow cover appeared a bit thin for winter. 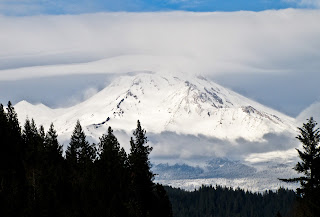 Lake Shasta itself was a pleasant surprise. The water level was a mere 42' below its banks, while recently it has been down as much as 70'. We stopped for a cup of coffee at a marina/resort restaurant and marveled at the hundreds of houseboats moored on the lake. We could enjoy a weeklong houseboat rental for a warm-weather cruise on this lake, sometime when we're not cruising in Alaska on Rhapsody. Random thought: it's been a very long time since I first learned to waterski, right here on Lake Shasta. 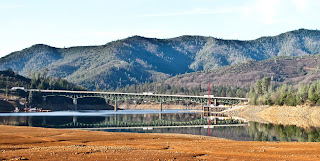 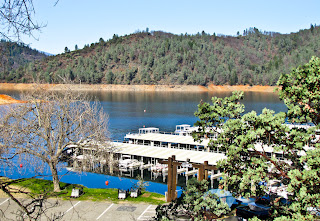 Road Trip sunshine turned into thick I-5 fog north of Bakersfield, predictable but it made for cautious yet boring driving. Eventually we turned off the freeway to explore the area around Buttonwillow. Why Buttonwillow? No special reason, I just liked the name, and the map indicated a State Tule Elk Reserve nearby. I did find a brief explanatory note online:

Buttonwillow started from a Buttonwillow tree as a landmark on an old trans-valley trail, and was used by ancient Yokut Indian as a meeting place, later becoming the site of settlers' store.

Buttonwillow  was very quiet and seemingly empty.  If winter is the quiet season, I wonder if there is a lively time of year. We never did find the Elk Reserve, but marveled instead at the huge expanses of empty cotton fields and leafless almond orchards, occasional oil fields, and countless flocks of unshorn, wooly sheep and their frisky lambs. The sheep were not feeling sociable: some chose to move off but most just ignored us. 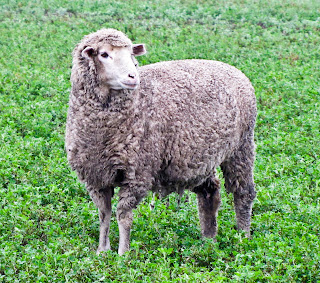 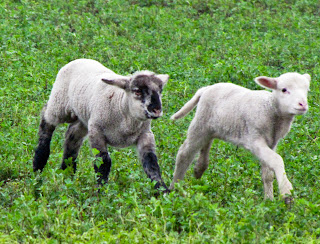 The many oil rigs, resembling flocks of mechanical preying mantis, ignored us too. 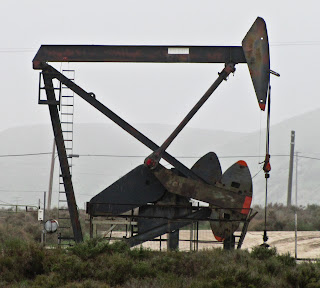 Posted by SeattleDee at 9:36 PM No comments: